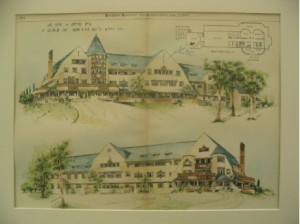 Hiram Walker commissioned the eminent architect Albert Kahn to design and build the Kingsville Train Station to be ready when construction of the railway line reached Kingsville from Windsor in the spring of 1889.

Built out of stone, and complete with a slate roof, the station was equipped with gas heating and lighting brought in from natural gas fields nearby.

Fares, round trip to Windsor were 80 cents for adults, 40 cents for children. To serve his business interests, Hiram Walker built the Lake Erie, Essex, and Detroit River Railway. For his recreation, he built a Grand Resort on the main line of the Railway and on the shores of Lake Erie, The Mettawas Hotel which opened in 1889. The elegant hotel no longer exists but the memories do live on. Designed by Mason and Rice Architects, The Mettawas Hotel did cost $250,000 to build.

Guests would arrive by rail at the Kingsville Railroad Station, then ride three blocks to the Mettawas Grounds in the Hotel’s carriages. October 2008. Janet and Anthony DelBrocco opened an upscale but intimate restaurant, in what was the Kingsville Railway Station, and in so doing, they continue the heritage started by Hiram Walker over 100 years before.